Our first Christmas as empty nesters

The kids have left home, and were not really coping, so this seems like the perfect chance to lure them back 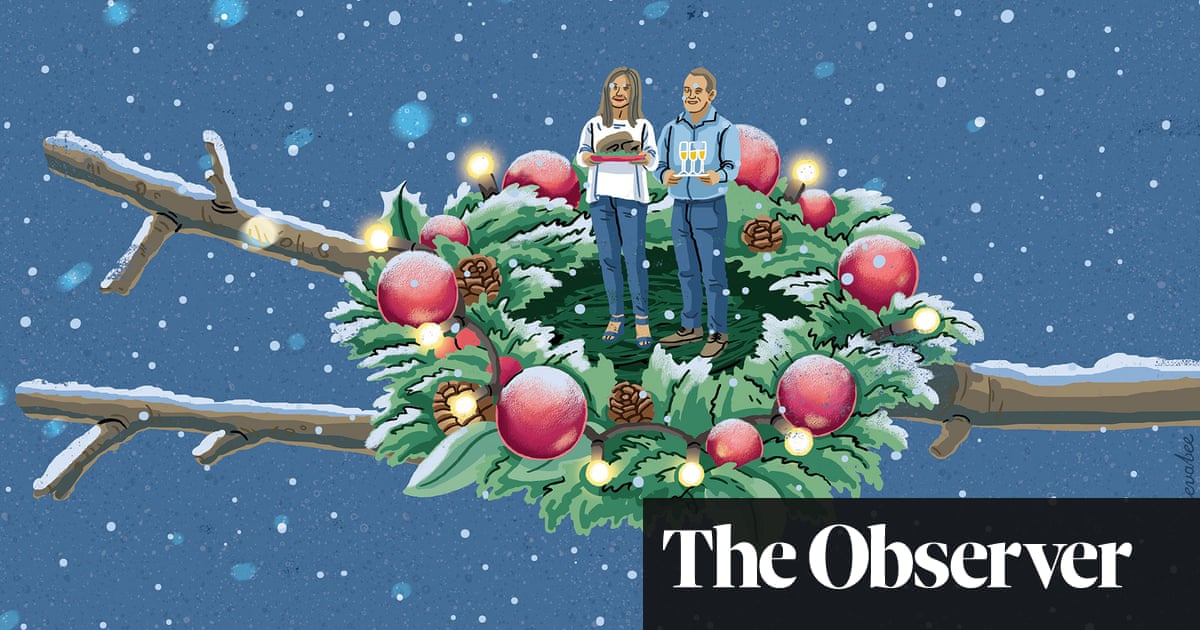 My husband and I dont think we have the condition until, one day last month, hundreds of miles from home, we find ourselves outside our younger sons university accommodation at 11.30 on a Sunday morning. I am clutching supplies in a little brown paper bag. Our son knows were in town, but isnt expecting this rude awakening. Its a surprise.

Do you think we should have called first? I say as we approach the entrance, the inappropriateness of what were doing dawning on me only now.

My husband pulls a face; its his moment of awakening, too. Call now, he says. Tell him were on our way.

But were already here.

We both suddenly see what we have become: two newbie empty-nester weirdos. For anyone to pitch up at an 18-year-olds gaff on a Sunday morning is never a good idea. For the parents to do so is intrusive and insensitive. I call anyway. Weve rustled up two blueberry muffins and an apple from the hotel breakfast buffet and picked up some fresh orange juice. Plus, weve spent 20 minutes walking here. And he needs to know we care.

At first he does not pick up. When he does, he says in a sleep-strangled drawl: Maybe could you just go away and come back later.

Fair enough, even quite polite, in the circumstances. But I say: Well, actually, were already outside. Maybe you could just nip to the door and then go back to bed? Cue a heartfelt groan. A few minutes later a hand appears through the opened door. The bag disappears.

So, its official then. We have Empty Nest Syndrome (ENS). Since our second son left for university in September we have joined the left behind, to coin a spooky-sounding term from a 2018 study of this non-clinical condition, conducted in China. It sounds like a six-part TV drama: One empty nest and two parents who will stop at nothing to clip their childrens wings.

Episode one starts this Christmas with me pimping the nest within an inch of its life so that the boys weep at the downy, desirable thing called home and never want to leave again. That was the plan until, earlier this month, two different friends poisoned my ear within 24 hours of each other, casually remarking that this might be the last time my sons came home for Crimbo. Sorry, what? They might choose to have it elsewhere in the future, one said breezily, or with friends or squeezes, said the other.

I am fully aware that children leave home, with some boomeranging back when it suits. I also know that parenting is a process of letting go, and not just of a disposable income. Migration is natural. But the idea that a cuckoo might entice my sons away with a more attractive festive roost makes me defensive, primally so. Plus, it ramps up the pressure to put on the best Christmas ever, and I already do a good one. But piling on the bling is a no-no, the end-of-childhood bell having already been sounded by my sons banning Poundshop junk, plastic and humorous gifts, such as wind-up Trump figurines, tabletop golf and novelty socks. This year, stockings must contain sustainable, sophisticated objets. Quality over quantity is the watchword. All very grown-up and theres the rub. I appear to have joined what other ENS studies refer to as midlife parents, empty nest older adults, and the elderly whose children have left the old adults alone at home. The elderly. The old adults. No wonder I feel washed up. Time has been called on the chief focus of my existence for the past 20 years.

It is predicted that by 2030 there will be more than 200m empty-nesters in China, a country that takes ENS very seriously, partly because the one-child policy implemented in 1980 (and terminated in 2015) means that for a vast swathe of empty-nesters there isnt even the salve of a nest half-full, a period of transition in which the children leave one by one, supposedly softening the blow. Ive had this, thanks to a two-year age gap between my sons. It hasnt made their launch any easier, possibly because I thought I would be glad when my second son migrated. I looked forward to more time for myself. But I hadnt factored in the other bird in my nest: the husband.

Forget all that indulgent me time, the empty nest, chirp the experts, is a chance to reconnect and rekindle your relationship. Ours is very satisfactory as it is, thank you very much. But no, we must plan adventures together, say husband-and-wife marital wisdom podcasters Ashley and Marcus Kusi, authors of Our Bucket List Adventures: a Journal for Couples. Hmmm. Bucket lists, with their implications of the Grim Reaper metering your time, are not for me. There is no way I am going to invite my husband to celebrate our mortality deux.

Repurpose yourself is another common recommendation, which makes me feel like upcycled furniture. Kim Smith, an American counsellor and author of Embracing Next: an Empty Nest Enjoyment Guide, says its time to focus on the future. Shes keen on the re prefix, too. Reframe, refocus and refeather is her mantra for maximising your enjoyment of the next chapter of life.

US holistic psychotherapist Dina Molina, author of Empty Nest, Sexy House, talks of the sexy power that is ours for the taking. Go out, she says, have fun with friends, renovate your home. Erin Marshall, a US interior designer, actually specialises in EN renovations. Avoid turning your house into a shrine by filling every wall with photographs of your kids; curate them on a single wall instead, she advises. After all, she implies, you dont want to look desperate.

But maybe we are. A friend tells of how he recently traipsed across his sons town one sodden morning carrying bags of groceries for him. I felt like a bird taking worms to the nest, he tells me. Doing so sated his need to nurture, feed and provide, a need that he said can feel like a craving. Another parent has arranged an overnight business trip to her childs university 300 miles away so that she can fill her daughters fridge, as she puts it, the night before her exams.

I wish shed fill my fridge. Since our sons have left, its empty. It used to be bursting with food meat for the carnivore, fish for the pescatarian, beers in case mates came over, a freezer full of pizzas for late-night munchies. I find it ghoulishly fascinating that, having nurtured our two sons for two decades, I now seem unable to feed, let alone nurture, myself or my husband. I have to force myself to buy groceries and remind myself its not fair to leave the husband to do all the cooking. On the upside, it is very nice to be waited on.

At least we dont cry during meals. An artist friend told me that when the eldest of her three children left home, she and her husband sat at the supper table with tears streaming down their faces, for weeks. So did the younger daughter, aged 16, and their son, 11. My daughter missed her big sister, says the mother, and said she had lost her best friend. We were desolate. The mother went into therapy for six months.

Grief is one of a litany of symptoms that includes sadness, loneliness, anxiety, restlessness, guilt, bodily aches and pains, anger, irritability and frustration. A dip in self-esteem is another which, compounded by a loss of social connections and a change in identity, is likened to the feelings experienced by the unemployed. For my part, I find myself questioning what, if anything, I can still offer my children, beyond love, a roof and a nice line in banana muffins; worse, I catch myself wanting my currency as a mother affirmed, which feels weird and needy. As ever, parenting is not about me, alas, or at least is not supposed to be.

If only we didnt live as long as we now do, or involve ourselves in our childrens lives as much as we do. Back in 1900, short life spans and children living at home meant the empty nest only lasted two years. In the 1970s, when sociologists first popularised the term empty nest, it was 13 years. Today, with male and female life expectancy now at 79 and 83 respectively and the average age at which adult children fly the nest for good being 26, were talking decades and that, I realise, still gives me plenty of Christmases to gild the nest.

Milkshakes and Morphine: a Memoir of Love and Life by Genevieve Fox is published by Vintage at 8.99. Buy it for 7.91 from guardianbookshop.com