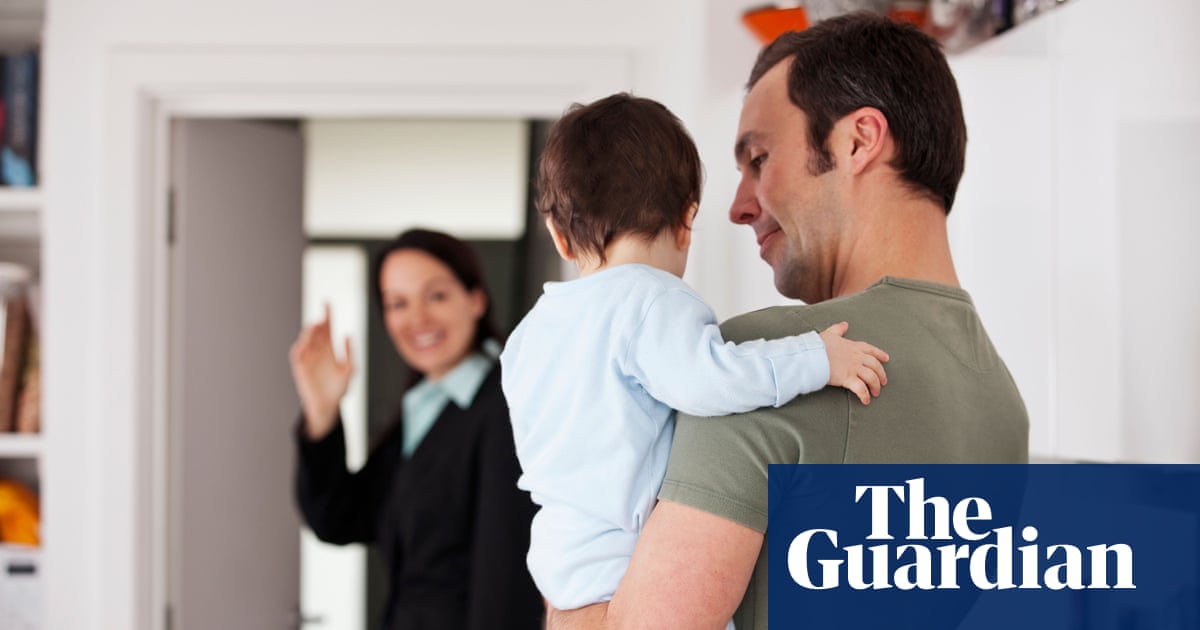 Of those surveyed, 62% of fathers took the maximum amount of time off and 93% of mothers, and around three-quarters of workers said their employer was equally supportive of mothers and fathers taking parental leave and over half said leave policies had made workplace culture better.

The US is one of only three countries in the world not to offer statutory paid leave, but increasingly states and companies are starting to take up the issue. So far, eight states and the District of Columbia have their own paid family leave laws.

Brad Harrington, executive director of the center and lead author of the study, estimates only 20% to 30% of companies in the US offers paid parental leave. He said it reflects a pronounced change in corporate attitudes to new fathers taking time off.

Having done the study on paternity leave five years ago, these numbers were shocking to me. I did not expect 80% of people to say the organisation finds dads taking this leave acceptable and three-quarters to say its equally supportive of women and men, he said.

The 2014 study found that nearly three-quarters of fathers saw two to four weeks as an appropriate duration for paternity leave and 76% said they would prefer not to take all their time off at once.

Since then, there have been a number of legal cases against companies involving paternity leave including against JPMorgan Chase and Este Lauder which have helped put pressure on companies to make their parental leave policies gender neutral.

However, the study also shows how traditional gender roles endure both at work, where more women than men reported changes in their perceived career potential, and at home even among workers who claim to aspire to equality.

The vast majority of men, 97%, said one of the top reasons to take leave was to share caregiving with their partner. But when they were asked about how caregiving and household tasks were divided, their answers painted a different picture.

While about 75% of employees said both genders should give the same amount of care, the majority of men and nearly half of women admitted that in reality the female actually did most of it. A tiny fraction, 2%, of men said they do more of the childcare.

Men and womens experiences of the return to work following parental leave was also considerably different.

Meanwhile, more women reported an increase in their responsibilities and manager expectations after birth. Half of the women said they used flexible work arrangements after becoming a parent, while just 27% of men did.

Similar percentages of men and women said they enjoyed their careers and that it gave them a sense of achievement, while around half of women and 44% of men said it was a key part of their identity.

On the subject of career advancement, 59% of women and 49% of men said leave could be limiting and both genders said they feared it would have an impact on their progression long-term.

But on opportunity for promotion, more than double the number of women, 30% compared to 15% of men, believed their chances to be lower after becoming a parent.

Despite progress, the struggle for women to reach the highest rungs of power is demonstrated in this years Fortune 500 list, which featured a record 33 female CEOs, but still represents a tiny fraction of the total.

By that I mean give men paternity leave, encourage men to take time off to be with their kids early on in the kids life. Recognise that men have to make significant adjustments when they become parents. And so dont do all these things to enhance womens advancement and then turn around and say, Oh, but we dont expect the men to take up the slack.

In May, the American Civil Liberties Union (ACLU) and Outten & Golden LLP announced a historic class-action $5m settlement with JPMorgan Chase on behalf of male employees who claim they were illegally denied access to paid parental leave.

Derek Rotondo, 35, filed the discrimination charge after he was allegedly told by his HR department that mothers were considered primary caregivers, eligible for 16 weeks paid parental leave, while fathers were eligible for just two weeks.

The father of two from Columbus, Ohio, who still works at the company as an associate and investigator, said he has witnessed a domino effect across companies since the settlement, but that there is still substantial progress to be made towards changing attitudes towards paternity leave.

I do think theres still some way to go theres still going to be sort of the expectation, even if its tacit, for new dads to essentially come right back to work, but I think the research is showing thats starting to change.

He said equal parental leave is an essential component to creating gender equality in the workplace.

The old standard of women staying home, having babies and cooking doesnt apply and hasnt for a long time.