Hollywood is a constant savage battle between artistic vision and producers desperate not to be fired. Sometimes this means crowd-pleasing fun, but most times it means each new idea gets grabbed by every studio and wrung dry over the course of a few years before they move on to the next one.

Some of those ideas are weirdly specific. Like freakishly, pointlessly specific. For instance …

There are an infinite number of ways for aliens to kill us. They can drop asteroids on us, grow replacements of us in pods, or carefully wait for every Earth government to elect an insecure idiot with nuclear capabilities. But somewhere along the way, all movie aliens agreed on a single method: a big stupid beam of blue light.

In the ’90s, beams of blue light came out of every alien ship and death satellite, but it wasn’t until the rise of the superhero movie that blue light beams became the deadliest killer in all of cinema. Beams of blue light are practically the main character in most Marvel movies. Here’s Iron Man waving to one: 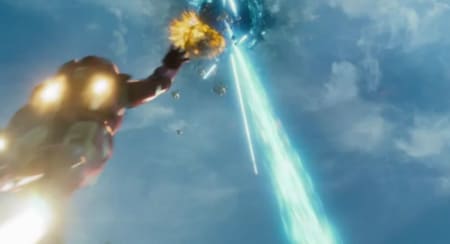 To differentiate themselves from the Marvel movies, the DC superhero films decided to be shitty piles of unlikeable misery. However, they did end up using the same blue light beams. In Man Of Steel, all of Metropolis not smashed into rubble by Superman himself is vaporized by a giant blue beam. 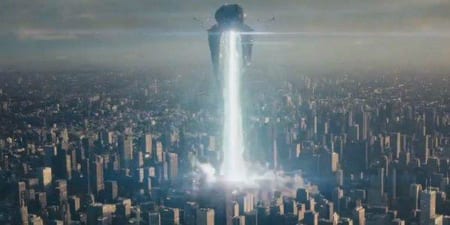 No matter how many cool weapons the bad guys came up with, they kept coming back to the blue beams. They even showed up in Transformers: Dark Of The Moon. Think about that for a minute: It’s a movie about robots that turn into fighter jets, Laserbeaks, and dinosaurs, and some asshole still suggested, “What if we blew everything up with just, like, some big blue beam?”

Suicide Squad is a movie featuring 416 potentially interesting characters and one Jared Leto’s Joker, and even that monstrosity manages to squeeze in three giant blue beams. 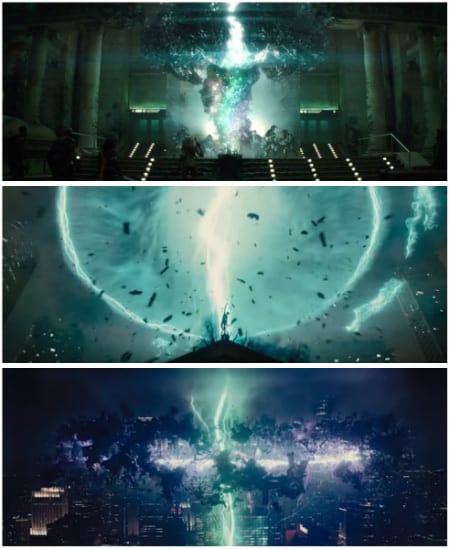 Warner Bros.
They happened in Act Two, the seventh Act Three, and the 14th denouement.

At this point, blue beams of light have become so common that the poster for Fant4stic featured one as the main antagonist. That really happened. They actually marketed this movie as four bored people staring at a cliche, and it was the most honest advertising in the history of the world. 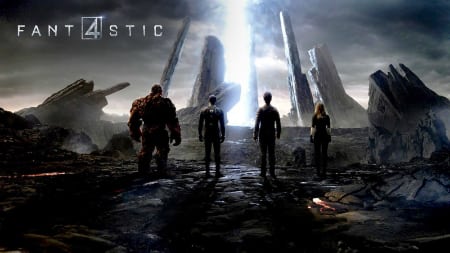 20th Century Fox
Audiences everywhere said, “Oh, sweet! Blue beam of light is in this one?! I hope they went with its original costume!”

’90s Femme Fatales Killed Everyone With Their Legs

In the 1990s, when Cobains freely roamed the Earth and Jolt Cola turned children into vibrating corn syrup, a new breed of deadly and mysterious creature emerged. Its habitat was the action movie and it hunted with a natural weapon as deadly as it was sexy. We’re speaking, of course, about the North American ’90s Femme Fatale who always killed her prey by wrapping her legs around its face.

It was a decade in which every woman owned seven to 15 ThighMasters, and it led to an epidemic of skull-crushing leg murder. Historians believe the trend started around 1993 when Lena Olin killed Gary Oldman by squeezing his brain into cubic zirconia in Romeo Is Bleeding. 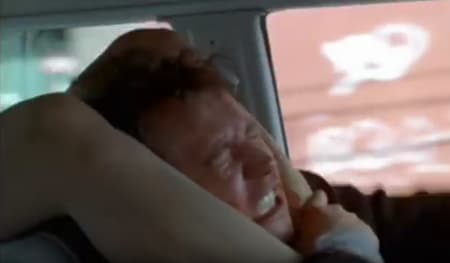 Later that same year, Famke Janssen played a Bond villain in GoldenEye who didn’t even have to get her legs around your fragile neck or brain. She killed her victims by just wrapping her legs around their body, a finishing move so unbelievable, she almost certainly discovered she could do it during a tragic sex accident.

Also in 1995, Sonya Blade leg-killed Kano during their match in Mortal Kombat. It was truly a glorious year for sexy thigh slayings. Every movie cop in 1995 had no idea if someone was murdered, or if they just really misunderstood the instructions in a Kama Sutra maneuver. 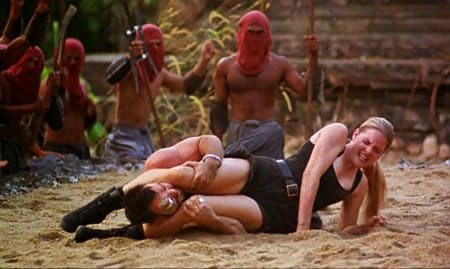 Eventually the ’90s ended, and women in movies put their legs away and switched back to guns and knives — with one notable exception: Mystique. Since the X-Franchise began in the year 2000, she has single-handedly reduced the face population with her legs. She may be one of the Children Of Tomorrow, but her murder weapon is Class Of ’95 Forever. 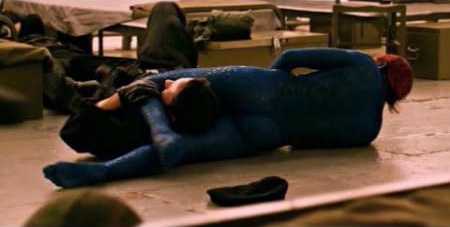 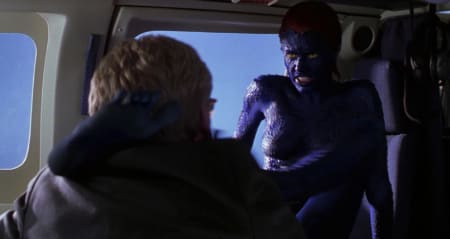 How do you kill an unkillable enemy? Wrap your legs around its head and squeeze? Sure, that works if you’re a lady with highly trained thighs, but what if you’re not so lucky? The answer is simple: liquid nitrogen. It’s fast-acting, effective, and in movies, you can find it everywhere.

The trend started in Terminator 2 when Arnold, as the outdated T-800, faced off against the totally sweet liquid-metal T-1000. For most of the movie it looked hopeless. He could make himself into floor, his arms were knives, and bullets only made him look radder. But look what happens when you douse him in liquid nitrogen, say something awesome, and shoot him: 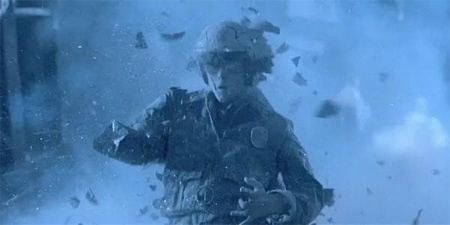 Before we get into how overused this trope became, we should mention it’s mostly bullshit. Yes, super cold things make nearby things super cold, but nothing freezes anything as fast as movie liquid nitrogen freezes them. In real life, getting it on you doesn’t do more than burn your skin. It doesn’t, for example, snap your legs in half and turn you into a shrieking slushee pinata. Speaking of, please enjoy this scene from 2004’s Mindhunters.

In Demolition Man, Wesley Snipes is so impossible for the wussy future to defeat, they have to thaw out Sylvester Stallone to deal with him. Which seems strange because the future is well-stocked with liquid nitrogen and the moment any of it gets on Simon Phoenix he instantly becomes 100 percent Popsicle.

When there was nothing original left for this trope to do on earth, 2001’s Jason X naturally took it to outer space. The movie is a combination of every tired idea ever brought up during a Hollywood story meeting, including the shattering of a frozen human. But how were the screenwriters going to create a believable way for a woman to freeze in outer space? When you hear the answer it’s going to seem obvious: By getting her head dunked in a conveniently placed sink full of pointless sequel-grade liquid nitrogen.

When you picture the future or a more advanced alternate reality, what do you see? Robots? Silver bodysuits? Butt plugs that connect to your social media and calendar while cooking the perfect egg? Of course, but in the ’00s, filmmakers decided there was one technology that would definitely be there: blimps.

Yes, as CGI became advanced enough to render anything a filmmaker could imagine, they all imagined a world of blimps. They were the same technology that let our great-grandparents float over NFL games and let clowns turn inflatable tubes into puppies. They’re as fast as a bicycle but 400 times more flammable, and yet Sky Captain And The World Of Tomorrow was sure blimps would rule their oddly futuristic 1939: 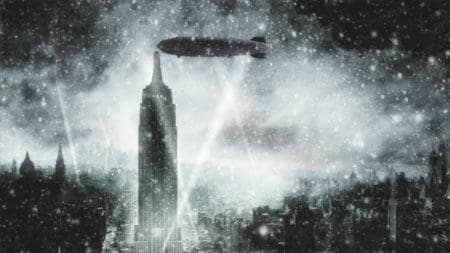 This absurd idea seemed to start with Kurt Wimmer, the director of 2002’s Equilibrium. It was mainly a movie about gun dancing and the nature of art, but it started the trend of using blimps as a way to sell the “futureness” of a movie.

Afterwards, this uniquely insane idea was used in Sky Captain, The Golden Compass, Stardust, and Southland Tales. If it was a movie made in the 2000s but set in a futuristic or alternate-world fantasy, its skyline definitely included the most hopelessly inefficient method of travel ever invented. 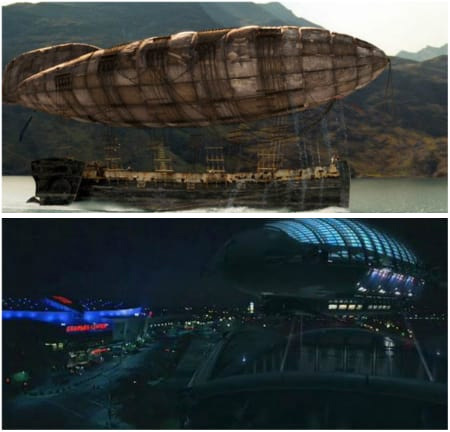 And that’s not even getting into the realm of video games, where airships dominate the skies of the Final Fantasy and Fallout franchises. There’s something about a fictional zeppelin that just captures the imagination in the way that a real one never, ever could.

In the ’80s, Giant Barrels Of Toxic Waste Were Everywhere Ready To Deform You

Today, our greatest political thinkers are using the environment as a place to dump coal waste until it fixes the economy, but during the ’80s we considered the environment an important thing. One of the main concerns we had was toxic waste, and this was reflected in the art of our cinema. People in movies were leaving uncovered vats of hazardous materials under every catwalk and dumping leaky barrels of it into every pond they could find.

“So what?” you might be saying. “Not worrying about where to put radioactive waste helped them create more jobs!” And you’re not wrong, but the only jobs they created were face-half-melted monster and CHUD. 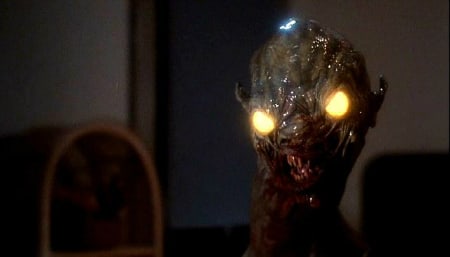 Obviously, hazardous waste in the ’80s did more than make monsters. It also made Ninja Turtles and Toxic Avengers. Getting dipped in carcinogens was probably the origin story of a disturbing number of the super-powered characters from your childhood. 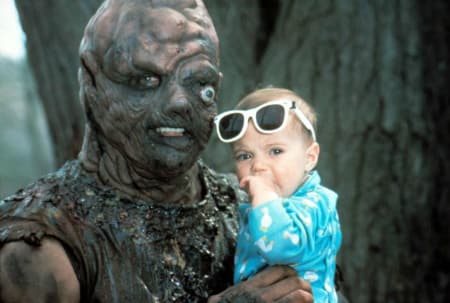 Of course, no discussion of a toxic waste backstory is complete without mentioning The Joker. In the 1989 Batman, Joker falls into a hilariously lethal vat of chemicals and all it does is give him a skin condition and an enthusiasm for childish jokes. Like everyone that decade, the only thing deadly chemicals did was make him crazy powerful at the cost of looking a bit more ugly.

Obviously, this is ’80s movie nonsense. Exposure to toxic waste in the real world mostly melts you into a puddle of imminent, certain death. And one might argue that a movie where that happens would be the furthest thing from entertaining. And to that we have three words and one hyphen:

Desert Sandworms Went from One Distant Planet To Everywhere

The idea of a titanic worm terrorizing the desert was popularized in the ’60s by Frank Herbert when he wrote Dune. It was a unique threat to the spice farmers of that particular universe, and quickly became a genre of monster infesting every single science-fiction desert to ever exist. If you’re a nerd and the movie you’re watching, the book you’re reading, or the video game you’re playing has a desert, there is a 100 percent chance it’s infested with giant worms. And you owe all that to Frank Herbert.

Maybe sandworms became popular because of their toothy, inhuman mouths or their simple-minded drive to devour. Maybe it was because they’re easy to draw, but for whatever reason, they became the go-to desert monster for every genre. 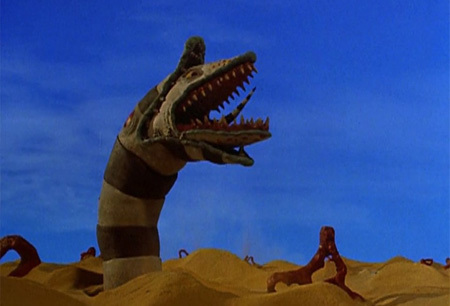 Boba Fett fell into one, Beetlejuice was eaten by one, and they even tried to kill Kevin Bacon.

Usually sandworms just pop out of the ground and stupidly gnash their teeth. Tremors was the first movie to really explore their personality. It started as an idea that came to director Ron Underwood when he was hiking in the desert. While resting on a boulder he thought, “What if, like … sandworms?” That simple variation of “The Floor Is Lava” grew into a film series spanning two more movies than the Mannequin and Weekend At Bernie’s franchises combined.

Across the Tremors sequels, the Graboids evolved from a stale Dune rip-off into one of the most layered, realized creatures in all of science fiction. They became more than just menacing tubes undone by simple rocks and floors. They developed legs and eventually the most lethal of all nature’s adaptations: the rocket fart.

You can find Tiagosvn on Twitter. Nathan Kamal lives in Oregon and writes there. He co-founded Asymmetry Fiction for all your fiction needs. Jordan Breeding has a blog, a twitter, and a blimp that makes your car look like a covered wagon.

Subscribe to our YouTube channel, and check out 5 Dumb Movie Tropes They Need To Bring Back, and other videos you won’t see on the site!